Searching for a specific young plant or cuttings?
> History

Gruppo PADANA, the world of seedlings

Since 1988, when Giorgio and Paolo Gazzola took over a large part of the property with 8.500 m² of greenhouses from their father Albino, the company has never ceased to develop and increase the covered area and its sales organization.
Success has come due to a professional approach which provides on the one hand an excellent quality product and on the other great attention to customers' needs with punctual deliveries and competitive prices.
In 2016 the company has approximately 250.000 m² of greenhouses and around 30.000 m² accessory agricultural facilities which allow to better satisfy customers from all over Europe thanks to an assortment of over 2.500 items.

Recently a large reorganization project has been implemented to develop the main headquarters at Paese, including the building of a new complex for logistics, services and offices, on an overall area of approximately 16.000 m², 5.000 m² of which on the ground floor of the new block.

The new logistics centre will allow us to load/ unload 10 vehicles simultaneously in a controlled atmosphere to keep the seedlings at the optimum temperature until they are loaded into air conditioned vehicles and delivered to our customers.

The building, of the new logistics centre and a large new greenhouse of approximately 65.000 m², has given us the opportunity to install a large photovoltaic system distributed over the different buildings, for a total power output of approximately 3.5 MWp. 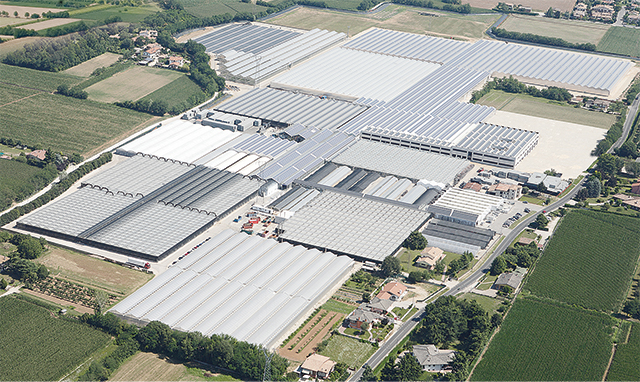 Gaiarine: the rebirth of a historic site

In 2010 at Gaiarine Gruppo PADANA purchased the site of a company formerly called Resteya, which in the 80s was a European leader in the production of seedlings.
Part of the existing facilities have been renewed and are nowadays in production; next to these greenhouses covering an area of around 70.000 m² have been built, to which will be added almost 6.000 m² of auxiliary agricultural facilities. Also here the building work has given us the opportunity to install a photovoltaic system with a power output of 1.6 MWp.